Eugenio Recuenco was born in Madrid in May 1968, in the middle of student protests that had spread out from Paris. As he says “I heard all that fuss, and was in a rush to be born and see what was going on”. He graduated in Fine Art –painting-, from Universidad Complutense de Madrid.
Without a physical space to create his large-scale paintings, he began to collaborate with fashion magazines -first in Spain and later in Paris, where he would often spend long periods of time- while waiting to be able to devote himself to painting. Vogue España, Madame Figaro, Wad, Vogue UK, Spoon, Planet, Vanity Fair, Ster, Kult, Twill, GQ and Zink are some of ther magazines he worked with.
It was in Paris that he produced his first advertising piece for Boucheron. From that moment on, many brands would begin to call him, including Nina Ricci, Diesel, Shanghai Tang, Yves Saint Laurent, Playstation, Custo, Le bon Marché, BSI Lugano,  Pernod Ricard., Barceló Hotels, DYC , Dorsia, Puy Du Fou, Canal + or Naf Naf.

In 2007, 2012 and again in 2021 he was invited to create the Lavazza Calendar.
Also in 2007 Eugenio was called from the US to conceive, together with Eric Dover, the set design and staging for the opera Les Huguenots, at the Richard B Fisher Center in NYC.

Paris became the city that established his rhythm. It was here that he also created his first advertising spot, this time for “Nina”, by Nina Ricci. This newly-opened avenue quickly lead to opportunities with other brands such Loewe, Freixenet, Mango, Codorniú, Chivas Regal, Regione Campania, Vanderbilt and Motorola, among others. It is in this period that he starts his collaboration with recognised directors of photography from the film industry such as Darius Khondji, John Mathieson, Benoit Debie, Axel Cosnefroy or Edu Grau.

In 2008 his video Essence of Seduction won the award for Best Advertisement of the year in Spain and ‘Best Short film’ at the Mexico City International Film Week. From that moment, he continued to create short films and videoclips, such as Rammstein’s Mein Herz Brennt.

His  photographs had already been shown at the Reina Sofia Museum in Madrid, the BAC (Barcelona Arte Contemporáneo), Naardeen Photo Festival, FEM (Festival Edición Madrid), Les Rencontres de Arles,  PhotoEspaña, Art Toronto 2007 and the National Spanish Library; It was once again in Paris where he would have his first solo exhibit, Dream and Storm, at the Bertin-Touleblanc Gallery.

In 2004 he was given the ABC National photography Award, in 2009 he won Gold and Bronze at the Sol festival, and in 2006 and 2013 his photographs won Gold Lions at the Cannes Lions festival.

In 2011, in the official section he projected his film 88:88 and Desire in ASVOFF Fashion Films Festival at CaixaForum in Barcelona.

In 2012 he also appeared in the official section of the San Francisco International Film Festival Fashion with his film Pure Beauty.

In 2013 is TeNeues who calls him to perform his first solo book, REVUE, whose release coincided with a solo exhibition at the Camera Work Gallery in Berlin in September 2013. That same year his films Pure Beauty and Air were projected in the Official Selection of Festival of Montreal Fashion Week 2013.

In March 2014 his films 88:88 and Desire are exhibited in the auditorium of the Museum at FIT in NY, in a piece called “Stories” under the “Hispanic – American Fashion Culture” conference organized by The Cervantes Institute in New York.
Also in 2014, The Kunsthalle Museum in Rostock, Germany, makes a retrospective of his work, which was also present at Fotografiska, Stockholm.
In October that same year he participated in the exhibition commemorating the 20th Anniversary of The Fashion Magazine GQ, “Man in Progress”.

In 2015 he participates in the 25th anniversary of Deichtorhallem Hamburg (Germany) with three pieces inspired in the work of the great artist that gave name to the exhibition “Picasso in Contemporary Art”, also exposed at the end of that year in Ohio (USA) at the Wexner Center for the Arts.
Later in 2015 he was invited to collaborate in Distinction, a retrospective about fashion photography for the Museu del Disseny in Barcelona.

In 2016, the FIT museum in New York will display 3 works from the Fairy Tale Fashion, which would later be edited in a book under the same title compiling the rest of the series.
Shortly after he finishes his first short film as a director: Manuscrit Trouvé Dans L’Oubli, based on the book by Alberto Mendez The Blind Sunflowers, with more than 30 awards and nominations.

In september of 2016 he participates in a collective exhibition in CWC Gallery of Berlin, Germany: Latest Finds, with his last works from the series Gentifications and Nocturnals.

He was awarded the Sol de Iberoamerica with Silver press and Bronze in outdoor with the campaign “Humanoids” 2018 .
He had had three colectives exhibitions that year: in Conde Duque, (Madrid, Spain);  PHE Museo del Traje (Madrid, Spain) and Fotomuseo  (Bogotá, Colombia). In 2019 he opens an individual exhibition,  REVUE, in Sala Unicaja  (Palencia, Spain).

For almost 8 years, he has carried out a personal photographic project called 365º which consists of 369 photographs, one for each day of the year. 369 images, 8 years of work, 120 characters, a team of 300 people and Eugenio’s unique vision. A journey through the last 50 years of our time, a reflection of our virtues and imperfections and a walk through the memories of an exceptional artist. All within the same space; a very ambitious project that was fully exhibited for the first time as an installation at CEART, Centro de Arte Tomás y Valiente in Fuenlabrada, Madrid, in 2018.
The exhibition 365º, during 2019, was also exhibited in the Vital Foundation Room, Spain; in Camera Work Gallery, Berlin, and Shanghai Culturest, China. In 2020, it was exhibited at Creative Park, Taipei, Taiwan, and in 2021 in River City Bangkok. Some of the 365º photographs have been exhibited in Paris Photo, France, in Summerset House, London, and in ARCO, International Contemporary Art Fair, Madrid.

His next project, A Thousand and One Nights, will possibly be the biggest photographic project ever made.

He currently lives behind the camera. 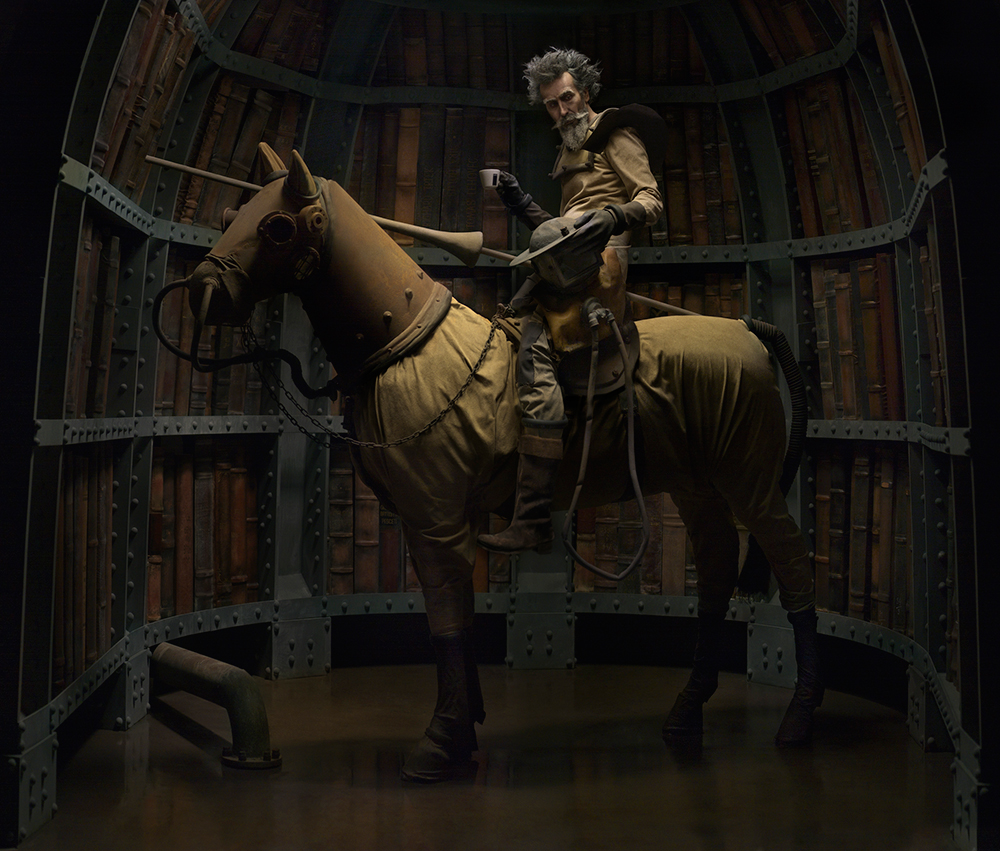